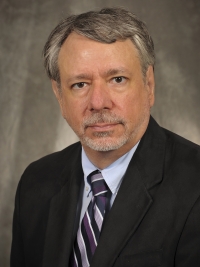 Scott Shattuck co-authored The Director’s Vision (Second Edition) and completed the Harvard Institutes of Higher Education’s Management Development Program at the Harvard Graduate School of Education. He came to SFA in 2007 from New York City, where he headed the Theatre & Media program at Marymount College of Fordham University. He was previously producing and artistic director of Jean Cocteau Repertory, an off-Broadway classical theatre company. He has also served as director of the London Dramatic Academy and as chair of the Department of Theatre and Dance at Pennsylvania’s Dickinson College. A full member of the Stage Directors and Choreographers Society, he has directed at Arkansas Repertory Theatre, the National Shakespeare Conservatory and the Texas Shakespeare Festival, among other venues, and served on the production staffs of the Denver Center Theatre Company and the Colorado Shakespeare Festival. He studied voice with Catherine Fitzmaurice and with Cicely Berry of the Royal Shakespeare Company, and performance studies with Richard Schechner of New York University, where he was a Faculty Resource Network scholar-in-residence. As an actor his roles have run the gamut from the title role in The Elephant Man to Tevye in Fiddler on the Roof to Menenius in Shakespeare’s Coriolanus. He has taught budgeting and financial systems to members of the Harold and Mimi Steinberg Theatre Leadership Institute and the William Randolph Hearst Theatrical Education Program, and assisted groups including New York’s Second Stage Theatre, Pan-Asian Repertory Theatre and Classical Theatre of Harlem. He has chaired granting panels for the Nancy Quinn Fund for Emerging Theatres, and served on funding panels for the New York Times Company Foundation, JP Morgan Chase, the New York State Council on the Arts and the City of New York Department of Cultural Affairs. He earned his MFA in drama at the University of Texas at Austin. At SFA, he teaches directing and has directed projects ranging from major musicals to plays by Shakespeare to readings in the biennial Festival of New American Plays. From 2014-18 he served as treasurer of the international Association for Theatre in Higher Education. He now serves as associate dean of the College of Fine Arts after having led the School of Theatre for nine years as its director, including one year as chairman of the university-wide Chairs Forum. He is chairman of the Nacogdoches Music Friendly Community as well as a dog-lover and an avid fan of public broadcasting.