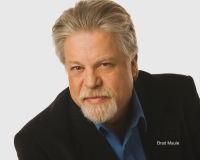 Brad Maule has received two Emmy Award nominations, one for best actor and one for best supporting actor in a daytime series, both for his best-known role of Dr. Tony Jones on General Hospital. He won the Soap Opera Digest Award for Best Supporting Actor and a Drama-Logue Award for Best Actor in a Musical for the west coast premiere of Stephen Sondheim’s Marry Me a Little.

Maule has filmed over three thousand hours of television, including such shows as Charlie’s Angels, Three’s Company, The White Shadow, The Last Married Couple in America with Natalie Wood, Too Close for Comfort, The Young and the Restless, Passions, Romance Theatre, and in another well-known role, as Ashlee Simpson’s dad on Seventh Heaven. He has also been a guest on Oprah, A.B.C’s The Home Show, Phil Donahue, Merv Griffin, Sally Jessy Raphael, Mike Douglas, Montel Williams, and filled in for Regis Philbin on Live with Regis and Kathy Lee.

On stage he has starred in such shows as Fiddler on the Roof with opera star Jan Peerce, Seven Brides for Seven Brothers with Ed Ames, No, No, Nanette with Nanette Fabray, and has performed with Bobby Gentry, Jim Nabors, Don Ho, and Vicki Carr. Brad has three solo albums of Texas country music: Living It Up, Chameleon and Small Town.

Maule is originally from West Texas, where he attended Hobbs School. He has two wonderful children, Hunter and Lily.