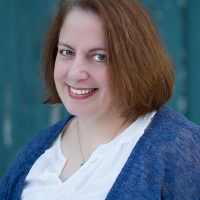 Jackie Rosenfeld earned a B.A. in Drama from Angelo State University and an M.F.A. in Playwriting from Texas Tech University. Her plays, including keepingabreast and Queen of the Mist, have been produced nationwide including two Off-off Broadway productions. She directed the School of Theatre's pilot radio drama production of O. Henry's Gift of the Magi adapted by Jack Heifner.